There are few ways to get your music out there, and the world now allows you to try to promote music online. Therefore, we decided to guide you to the vinyl awards trough the best sites to make your music sound in everyone’s headphones: 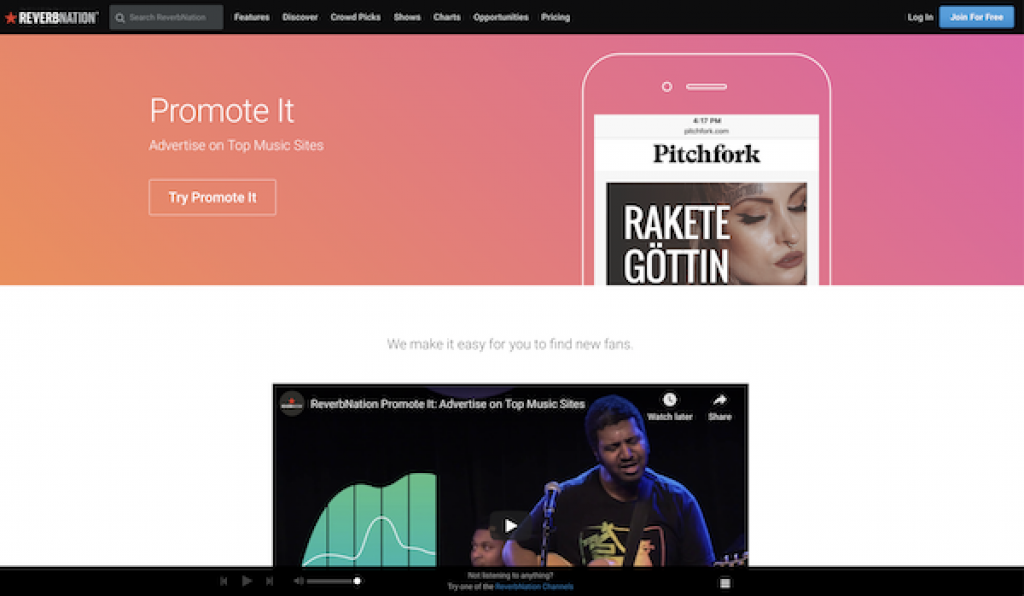 ReverbNation is a page that was created so that people could promote their music in different ways.

What ReverbNation does is create a space in which its users can find the best way to promote music online, through the options such as their TuneWidget or by using a wide variety of advertising tools available on its site.

Registration within ReverbNation is free. You don’t need to make any payment or deposit to start using it but to start promoting. You do need to cancel money depending on the promotion you choose.

Regarding reliability, ReverbNation can be found within different websites, such as YouTube, Spotify, Rolling Stones, among others that make the product gain both visibility and confidence with the general public. Besides, this site promoted huge successful bands like Rehab and Judas Priest.

To sum up, ReverbNation is an amazing service for promoting music. In the end, they count with amazing tools and were one of the best ways to grow back in 2007 –Today, other options matched up; keep reading. 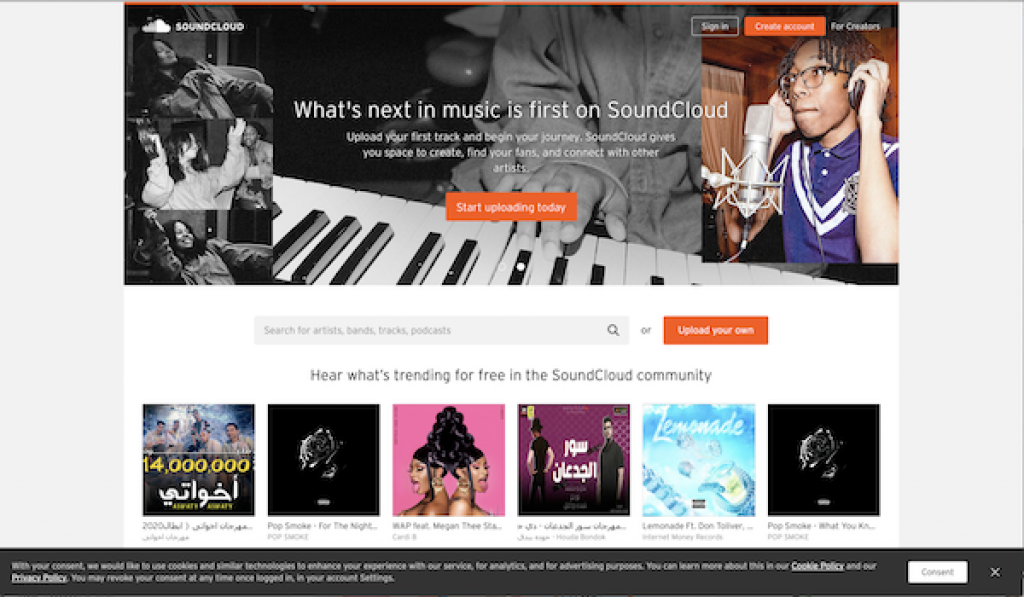 SoundCloud is a platform that serves as an online music distribution point where a variety of things can be done and collaboration between users interested in similar projects.

What SoundCloud does is allow people to collaborate, promote, or distribute their music projects within the same platform without the need for third parties to be involved.

As far as cost is concerned, joining SoundCloud is free. The only thing is that after uploading a certain number of songs, you have to start paying, in addition to which certain tools have to be paid for to access them.

Regarding reliability, SoundCloud has gained massive ground in the last years, is a platform where people look for collaboration and get the testimonials of its users.

That’s why SoundCloud is a good platform to share and promote music online, it even has good tools, but some points need to be improved. 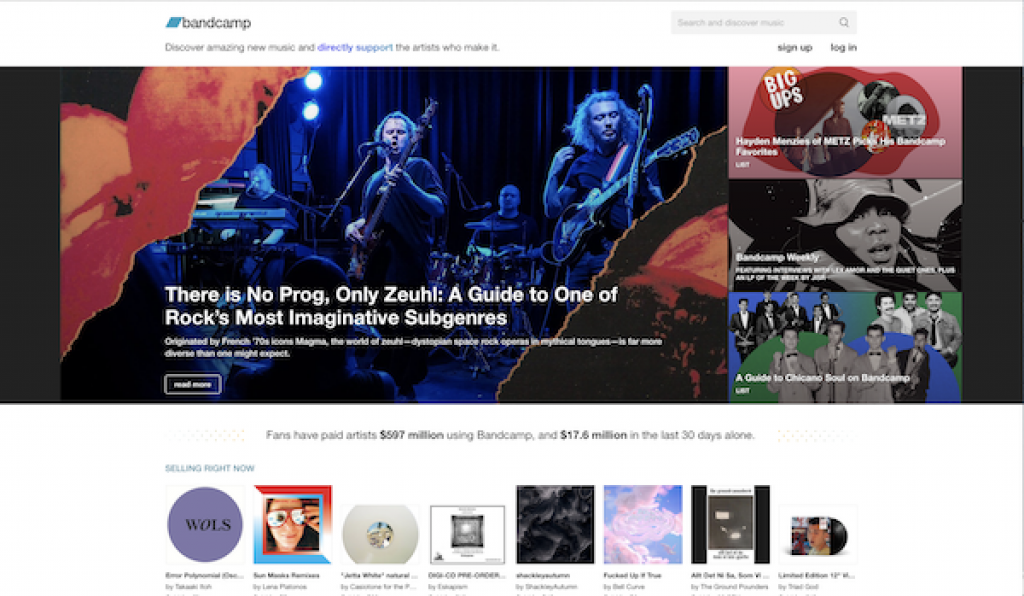 Bandcamp is a site that has served as an online music store for over a decade and that several artists have used as an alternative to recording labels to launch their projects.

What makes Bandcamp appealing is that they offer the possibility of selling individual songs or entire albums within their platform and the way that there is a promotion of the content.

Joining Bandcamp is free. The issue with payments is that these must begin to be made when you begin to sell your content within the site. This means that Bandcamp extracts a portion of the sale for them.

The site’s reliability has grown over the years, mainly because several artists decided to use it to promote their music instead of using a label. 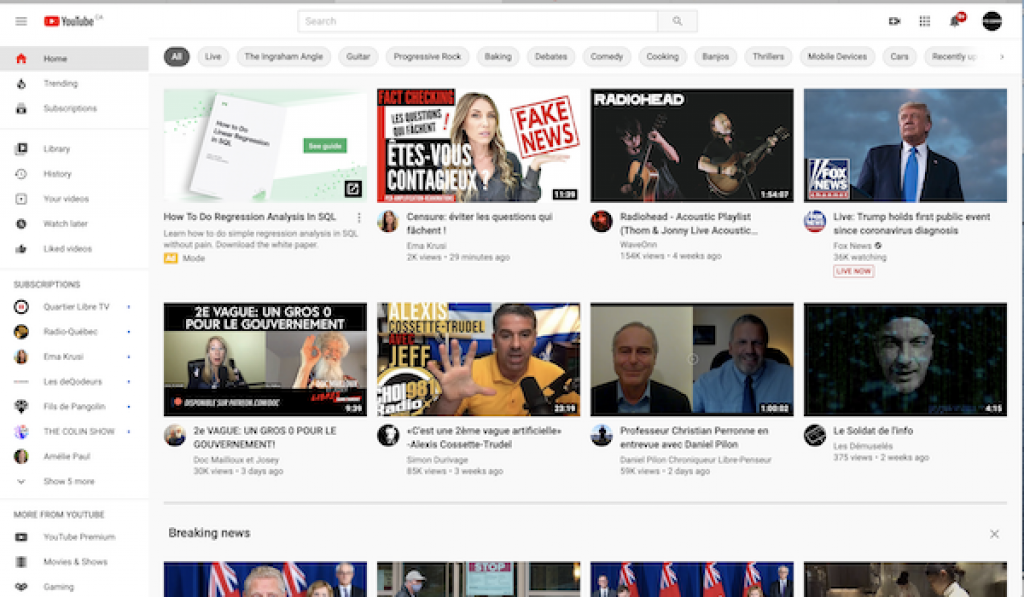 YouTube is a giant within the music company that has been around for quite some time and has sought to improve its horizons as time goes on.

What YouTube does is that it allows you to create content and upload it to their page. Furthermore, your music’s promotion can be improved depending on your will to make a full marketing campaign on YouTube’s site.

YouTube has various plans, which vary in price and range from $12/month depending on the service you want to hire. Anyway, YouTube can be used for free.

Regarding the site’s reliability, YouTube has been in the market for many years. It has gained its users’ full confidence and those who only enter into reviewing content from time to time.

YouTube is still one of the most used products by people as an entertainment method and a promotion for those who want to create music and be recognized. The good thing is that it is free, yet the market is pretty aggressive. 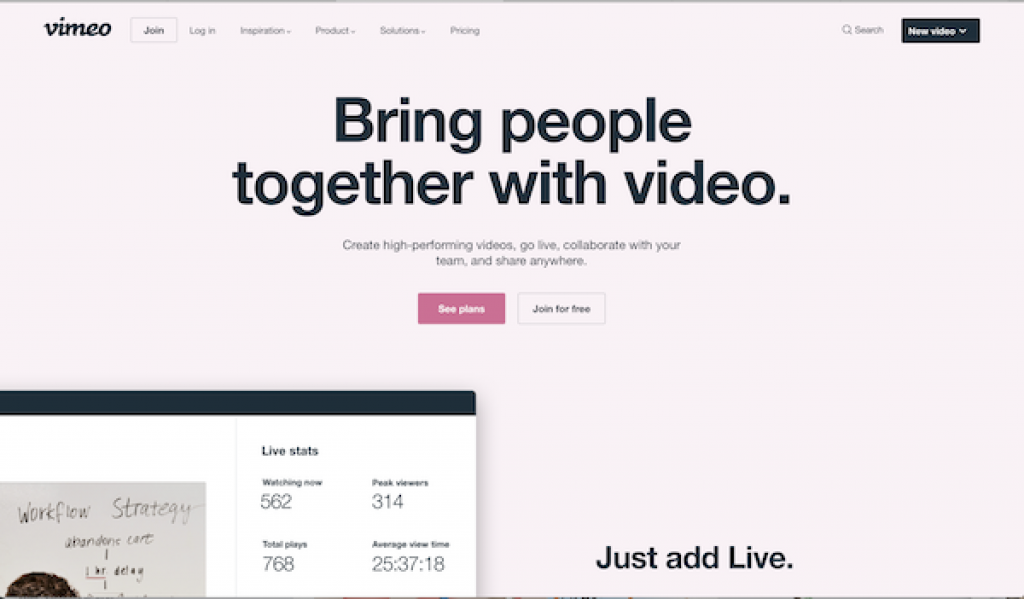 Vimeo is known for being a counterpart of YouTube, it is a social network of videos where you can find any kind of content and that serves as a site to promote new music.

What Vimeo seeks within its platform is that people can watch videos without constant advertising, but above all, it seeks to promote free videos for the users of its network.

Like YouTube, Vimeo has a free option and has plans for people who want to exceed their expectations, having Pro and Professional plans.

Moving forward, Vimeo’s reliability has grown over the last few years, as it has attracted the attention of more people and artists who have agreed to participate within its network.

In the end, Vimeo is one of the most used social networks to promote music, especially because people who do not use YouTube are mainly using this network. 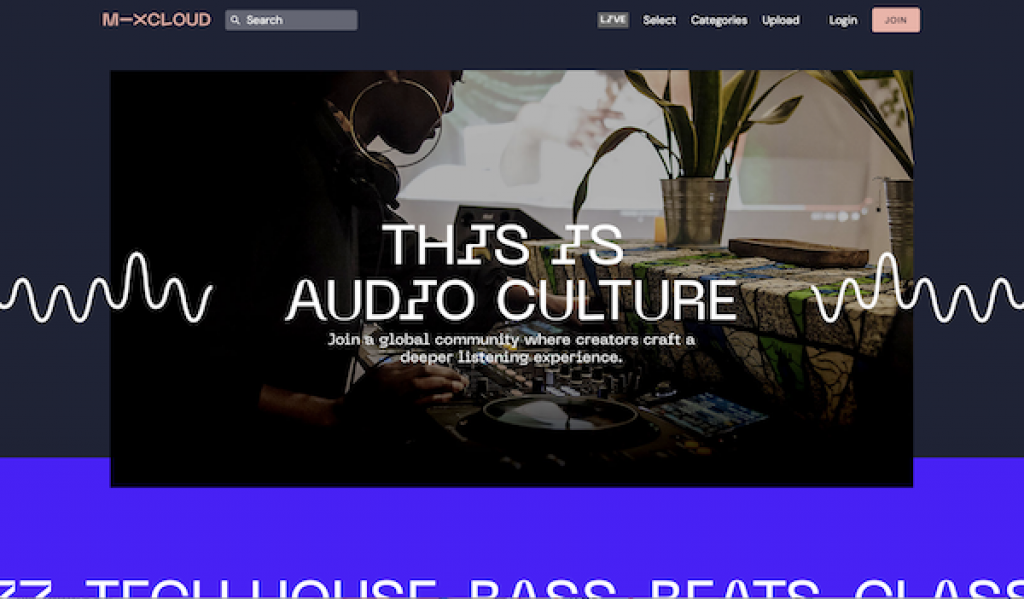 MixCloud is a service similar to Spotify, which serves as an online music streaming medium as well as some podcasts, among other variables.

What MixCloud does mainly is to connect people with similar tastes and artists who are looking to promote their music within the same application, without having to use third parties for this.

Although MixCloud can be used for free, its options are limited, especially when it comes to sharing music, so there is a plan to increase the possibilities, and it costs $15 per month.

As for the site’s reliability, it is important to say that it has recognized users who promote its use, such as Harvard School, TED Talks, and former president Barack Obama.

That’s why MixCloud is a great option for people who want to share their music since it allows you to connect with other users and get the music through several channels. 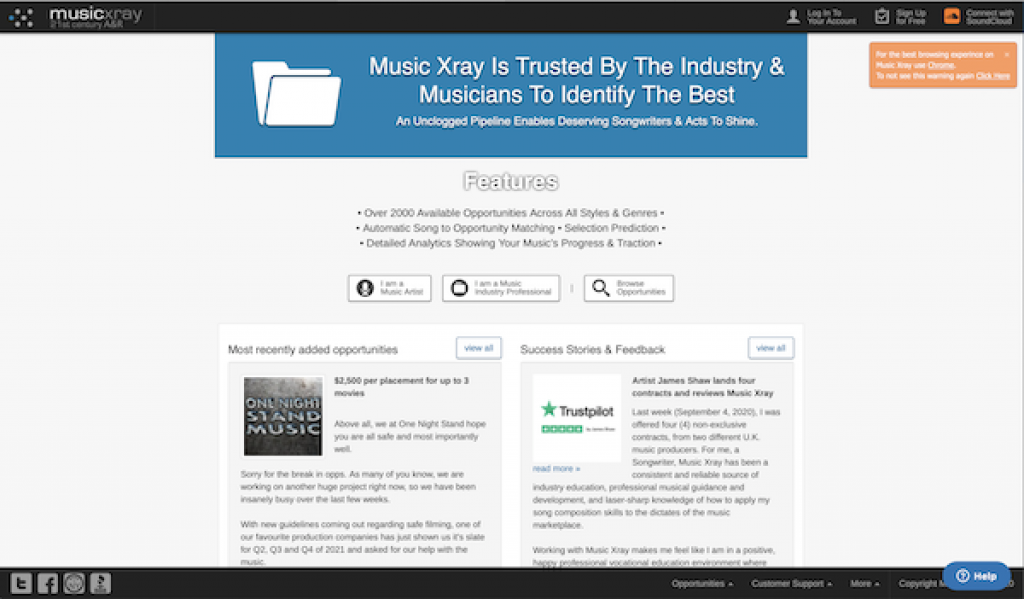 Music Xray is a company that relies primarily on technology at the musical level and seeks to connect artists with major record labels.

What makes Music Xray so appealing is that it changed the scheme, looking for new artists to be recognized by major labels through its platform, which is why it is an excellent platform to promote music.

There is no cost to join Music Xray, nor is there any cost to participate as an artist within site, but to enter as an artist, you must do so through an invitation directly from the site.

The site’s reliability is based on the testimonials of users who have been part of its community. Within various sections, you can get these testimonials and recommendations to Music Xray.

That’s why Music Xray is positioned as an excellent platform for those artists who want to be recognized since, generally, the record companies get good talent by using this page. 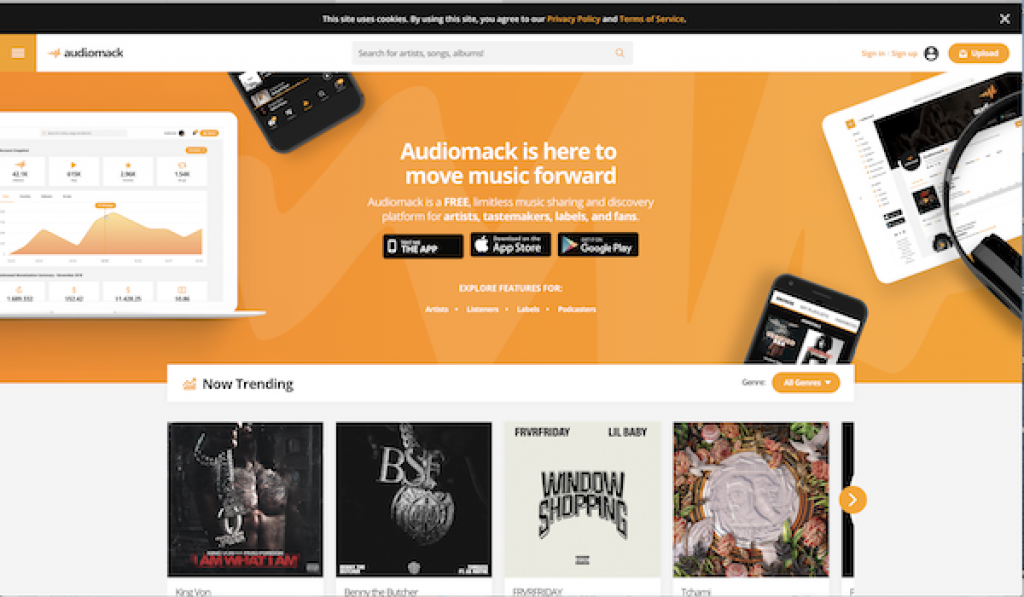 Audiomack is a platform similar to Spotify to promote music online, which seeks to distribute music through different media to let people know about new artists and famous music.

Audiomack seeks its users because they can listen to music, and if they are artists, they are allowed to upload their songs for free within the page to become known.

Moving on, Audiomack does not have a set cost in terms of use, registration, download of the platform is free, and even the songs can be uploaded for free as long as they do not violate the rules of the site.

As for the site’s reliability site, it is a service used by many arts. They have appeared in different media within this social field, giving them the green light to what AudioMack offers.

This is why Audiomack is positioning itself as one of the last few years’ innovative services and continues to look for ways to grow its community of both users and artists.

If you seek to get known along with the music industry, you will need to use as many tools as possible. Nevertheless, narrowing down a bit will grant you better focus, and some tools are better than others.

This way, despite being a bit outdated, ReverbNation’s tools are still used by professional and renowned artists, while YouTube is to musicians what Instagram is to influencers. So, keep those 2 at least and focus on your music. Good quality will get you far sooner than later.